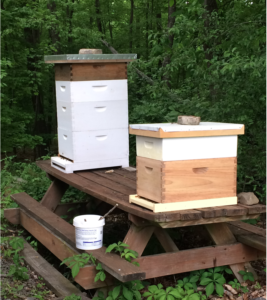 Last year was my first year with bees and I certainly learned a lot. If it wasn’t for my bee club and for some bee friends I made there – I think I may have given all of this up within six months. But there is something addicting about beekeeping. It’s more of a science than a hobby, and the more you learn, the more you realize you don’t know.

So my first year went well…I think. I learned that one of the main purposes of the hive is to propagate – so every year they will try to grow big enough to send out a swarm and start a second colony. The problem with this is that if a beekeeper doesn’t catch that swarm, up to 80% of them don’t find a suitable home and they will die.

Right now that is pretty devastating to our environment and there are lots of steps being put into place to try to protect honeybees. 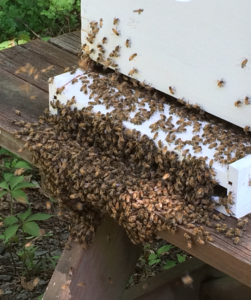 But I really started all of this wanting only ONE hive. After being in a bee club I was quickly convinced that it is better with at least two, so that you can compare what is happening, and know quicker if something is wrong, and also so you can borrow things from one hive to help another. So ok, I reluctantly thought that maybe I could manage TWO.

Well, year one, I saw swarm cells (queen cells) on my hive and I asked our bee president what the heck – they are about to swarm. I thought brand new hives really didn’t DO that (lesson ONE – they can always do that!). He suggested I split the hive into two and try to fend off the swarming. OK, my buddy, and bee mentor Dave, graciously came and helped me, and we successfully split the hive and so now I had two hives, which previously I had convinced myself would be ok. But then they swarmed anyway, and so I caught that swarm…and now I had THREE hives. 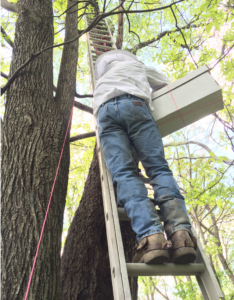 Well this year I decided, no more hives. Beekeeping is a lot of work, and a lot of money, so three would be my max. But I know if I don’t split them, they will swarm. But if I split them, then I’ll have six hives. NO. NO WAY. So I make the very uneducated decision to just “let them go”. Screw it. I don’t want more hives and no matter what I do – if I split the hives I will wind up with SIX hives (and then they might swarm anyway!) and if I don’t split them and I catch the swarms I’ll have six hives too. No. No. No. I’m not doing it.  I decide if they swarm, that’s IT. They can just GO.

Hahahaha.  Now if you’re a beekeeper you just shake your head at that comment and smirk. First of all it’s a stupid comment. We’re beekeepers, and we TRY to save bees. And second of all, if you’re a beekeeper – the sound of a swarm in your yard renders you POWERLESS to do anything other than immediately go into swarm-scramble-mode. You will start tearing into your bee shed and pulling out parts, you will go into other hives and grab a frame of brood, you will call and text all your friends and beg them to get their asses here with all THEIR equipment and poles and ladders and you will suit your husband up in a bee suit and send his ass up a tree to try to get bees. You’re POWERLESS. You can’t NOT do this. So my inexperienced decision to “let them go” was absolutely absurd and ridiculous.

I immediately went into combat mode. Analyzing the swarm, the height, the size. Putting together my swarm trap…and developing a plan for how to get them out of a tree forty feet up. 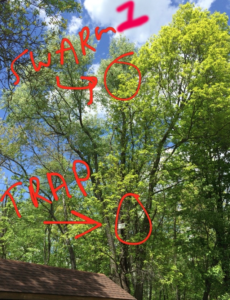 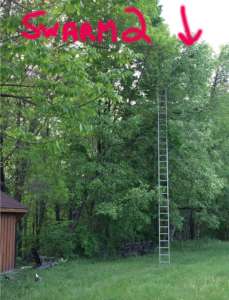 First we tried a very, very tall ladder. My husband is a NYC fireman so I figured this was in his wheelhouse. I suited him up, and up the ladder he went. But the only way to place the ladder made the swarm way too far out on the limb for him to reach. I encouraged him to climb out on the delicate little one inch limb and scurry toward the end, but he flatly refused. (Yeah, I know, I don’t know why either). We tried a bucket under them as far as we could reach, but no good. So, then we tried cutting limbs down around it and WHACKING the branch really hard and that worked! It made them all fall to the ground….where they promptly all got up again and flew back up onto the same spot on the tree.

So genius move three was to hoist a swarm trap up to THEM!! Brilliant, right? Thank you. The plan was for me (I’m an “archer” as you know thank you, thank you very much) to tie a long string to an arrow, then shoot it up and OVER the tree whereas it would gracefully and delicately lay the string perfectly on the branch and we could then tie up the swarm trap and get it up there.

Yeah, well. That didn’t work. The string kept snaring on things and yanking the arrow out of the air, no matter how we coiled or laid it on the ground.

So after a while we gave up. 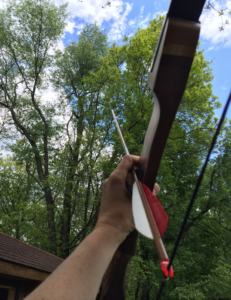 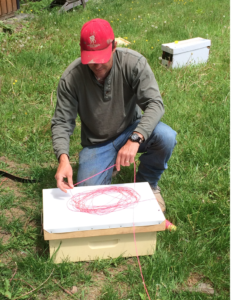 For two days they hung on that limb, through rain and all. I would go out there with an umbrella and stare up at them like I had given birth to them or something, and try to will them down with the force of my stare.

Yeah, that didn’t work either. Then something bizarre happened. On the third day they all left the branch and flew BACK to their original hive. I kid you not. I think this is pretty unheard of, but I’m not sure. It definitely isn’t common. There was a massive buzzing and the air was filled again, and then they were plastered all over the front of their old hive and in they all marched.

So an experienced beekeeper will now tell you that as odd as that is, it doesn’t mater. Between 10 and 2 the next day they will swarm again. But I’m NOT an experienced beekeeper, so that night I was so ignorantly happy and I slept peacefully knowing they were all safe in the hive, high-fiving each other and sitting down to a dinner of honey and pollen and telling stories about their adventures. 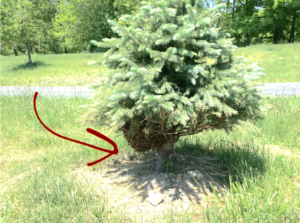 Well, next day at 10:30 the air was once again filled with a bazillion bees. (I believe that to be the actual scientific number). They came flying out of that hive like it was on fire but oh oh oh – they landed LOW on a shrub just twenty feet away. Practically on the ground. Now I personally believe they did this because of all that worrying and staring I did. They felt bad for me. They didn’t want to break my little bee-loving heart, even though I said I didn’t care about them.

And so I captured them easily, and all of a sudden I had FOUR hives. Two of which I really didn’t want.

Oh, but does it end there?  No silly. Remember, I had THREE hives, none of which I did PREVENTIVE swarming on because I was going to “let them all go”, remember? Snort. I’m so silly. So the next day after hive four is alive and well and happy and doing little bee dancing all around their new home, the air is filled once again with – SWARM!!!!! 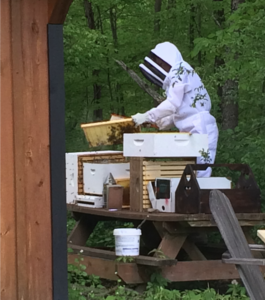 AHHHHHHHHHHH!!!!!!!! I launch into bee-mode, force my husband into bee compliance and catch this one with much more ease. I have no where to put them though except a very old wax NUC box, so in they go, and I find a friend who needs bees and he comes and picks them up. Whew. That’s great.

So the very next day – the air is once again filled with the crazy buzzing of bees everywhere and hive number three has spewed themselves into the air. Ahhhhhh! Well now I’m a seasoned swarm-catcher, damnit. I’m a damn swarm-whisperer. This time I don’t even disturb the husband. But alas, I do not have ANYTHING to put them in. My extra hive now contains swarm one. Swarm two went into that NUC box which is still with a friend who hasn’t transferred them yet, and so I put in a panicked call to my friend Dave who says “I have a NUC box. My son is heading your way soon – meet him on the highway!!”

See? This is how bee people think. He didn’t say to me “…but I thought you said you were just letting them all go and not caring about them?” He never said that. Because he is a seasoned beekeeper and he knew when I said it, that it was all just words spewing from my mouth with no sense of logic or reason to them. 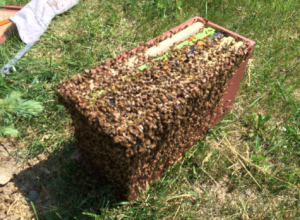 And so swarm three went into that NUC box and has been the most prolific yet. Anyone want to buy some very industrious and hard working bees?

Of course I bought more equipment too….but next year I plan to do swarm PREVENTIVE maintenance, like I was told I should do this year at our bee meeting a couple of months ago. And then I’ll just NUC them and sell the nucs. At least I think that’s my plan. Because now I have four hives and a NUC and remember – that means next year I’ll have (shudder) ten. Bees anyone?