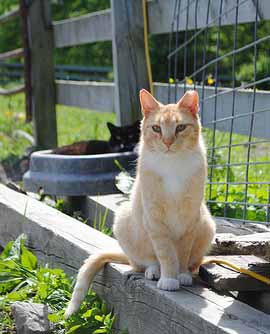 I know. I know.
Everyone that knows me is shocked. Wait…huh, who is writing this? Is this Kerry?

KERRY IS WRITING A BLOG ABOUT CATS??

Contrary to what many of you believe I do NOT dislike cats.

I am just more of a huge dog lover, but there are some blackmail pictures of me out there snuggling up with a cat or two. I do NOT dislike cats. Well. Not TOTALLY. And feral cats…I actually REALLY like feral cats. I’m impressed by them. And moved by them. And I like to watch them. I find them mysterious, and entertaining, and independent. I love their disdain for humans (I feel like that many days too!) and I love that they survive almost anything and that they can be seen throughout the winter, and in the heat of summer, and survive not only extreme heat and cold, but floods, and starvation, and injury and illness. I’m so impressed by how they adapt and find a way to survive and live and thrive, how they develop family networks and extended family communities, even though almost all the odds are stacked against them.

I like feral cats. I like that they keep the rat population down to “non-existent” at PIUTW, and I like how they lounge around on the hay in the barn. I like seeing them furtively look about as they slowly slink across a pasture, a yard or a field. I like how they look out for each other. I find it fascinating how they deal with an interloper into their territory. Laying in the high grass, watching the “evil trespasser” with their tails flicking, completely focused, waiting for the moment that if he crosses that invisible line they will have to go after him and drive him back. Then when it is done how they go back to laying around, cleaning their paws, complementing each other on a job well done. Feral cats are just damn neat. I just love to watch them.

So what is the problem?

Why do so many communities want to eradicate and kill them all? I really believe it is because they don’t have any concept or understanding about what they are doing. They believe that by killing them all or not allowing people to feed them, that the cats will go away. Au contraire my dear community. Au contraire. 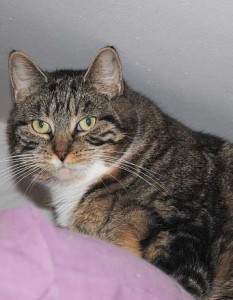 Here is something very interesting to know. AN EXISTING FERAL COMMUNITY WILL NOT USUALLY ALLOW ADDITIONAL CATS IN!

If you are fighting with a board that wants to eradicate the cats at your development, or have refused to allow people to feed them, this needs to be explained.

For example, say you have 25 feral cats in a feral community. If you leave them unchecked, every year every female will have one or two litters and those litters will stay IN the community. They are accepted. They will then have their own litters. And so forth and so on. However if you have 25 cats and you fix them all so no offspring are born – THOSE CATS WILL NOT USUALLY ALLOW STRANGE CATS TO JOIN THEM. So as they die (the average life span of a feral cats is about 5 years old) your community will get smaller and smaller until eventually there are none, or maybe just a few that wandered in as the community dies out and they didn’t fight them. But then THOSE few will not allow others in.

Starved cats do not “go away”. They are there because well before someone started feeding them, they found a food source – garbage, rodents, whatever it was. Or good shelter. Or feel it is safe there. That is why they are there to begin with. If you don’t help them with a little food, then they can become sick, ill, diseased, and this malnourished condition also makes them more susceptible to parasitic infestations, such as fleas and roundworms, but this does NOT STOP THEM from breeding. Then you have kittens born. Dying all over the place. Litter after litter. This isn’t good to watch, for visitors to your community to see, and it increases disease and wandering of these animals (where they then spread it).

Feeding them and managing a feral community actually keeps DOWN the number of cats.
WAY DOWN.

People that help feed these communities are actually doing a great service. They use their OWN money to care for and feed them. The healthier cat does not spread disease or wander as far. Taxpayers and communities save money by not ultimately having to trap them all and kill them all when it becomes unmanageable. Trapping, euthanizing and disposing of bodies all cost taxpayer money. So does arresting, fining, or taking people to court for feeding them! Individuals feeding them – does NOT cost the community a dime. The city and county should be HELPING with feral management, not hindering it, because in the end it is FAR cheaper to manage such a community than to just keep killing them all.

Also, really – how can you truly enforce this? People who care about animals, aren’t going to simply stop. Are you going to have to pay for police to monitor every area of woods, or garbage area, or backyard communities? Pay for all that time? Arrest little old ladies and fine them and drag them to court? People who care, will find new and innovative ways to keep feeding. And they should. Because they are the ones that are right, and people who want to stop them are the ones that are wrong. Studies prove this over and over and over again. Not feeding them doesn’t help you. It hurts you. Feral cats will survive ANYWAY. This has been proven in deserts and on deserted islands throughout the world where ferals survive without any nearby human habitation. So what are you really accomplishing in your community with feral cat feed banning? Again…nothing. 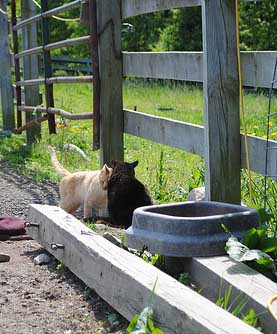 Within a few years, even without feeding them, you will be so overrun with cats that you will be forced to start taking drastic measure, like killing them and then the seniors in that community, their visitors, or anyone living in the area, will freak out and this will cause tremendously bad press. Killing them does nothing but sacrifice an animal’s life with absolutely NO positive return.

From the Alley Cats website: Eradication attempts are only temporary “quick fixes” that sacrifice animals’ lives unnecessarily and yield no positive or beneficial return. Study after study has shown that eradication (trap and kill) does NOT work and is counterproductive. Eradication causes a “vacuum effect,” meaning, within a few short months, other stray cats quickly move in and fill the vacated territories and start the breeding process over again. Roger Tabor discusses this phenomenon saying, “Although a total ‘wipe-out’ often appeals to authorities due to its apparent simplicity, it normally fails, as it does not allow for biological reality, and worse, is often counterproductive.” Meaning, when cats are removed, rodent popu­la­tions explode and increase the spreading of disease. Instead of eradicating a colony and killing cats, steriliza­tion would be the most effective and humane method of control. Roger Tabor adds that, “if a colony is neutered and returned to its area it will continue to hold the location and keep other cats out by its presence. The group’s popu­lation will gradually decline over a few years.”

And you definitely don’t want to miss reading THIS study if you are still not a believer: Economic study estimates costs of feral cat control: Catching and euthanizing feral cats costs billions of dollars more and is less effective at population control than are trap-neuter-and-return programs, according to an economic study commissioned by Best Friends Animal Society. With an estimated 87 million free-roaming, homeless cats in the United States, local governments would pay almost $16 billion to trap and kill these cats as opposed to approximately $7 billion for supporting TNR programs run by rescue organizations and volunteers, according to the study published in March. (you can read the full study here: http://www.avma.org/onlnews/javma/jun10/100601gg.asp)

OK, so what CAN you do? You now know that not feeding them does squat. Doesn’t help.

How about moving them all? Well, that is simply pointless. The cats CAME to that area because it was a good area for whatever reason – shelter, food, safety. Removing THESE only create a spot for others to move in. And where will you move them to? These cats already know the lay of the land. Where to find food, water, shelter. Moving them is likely a death sentence. They can’t move to an area with other ferals – that feral group will drive them away. You can’t put feral cats indoors – it is cruel. They are wild animals. So moving them doesn’t work either. Get that out of your head. You won’t have THESE particular cats if you move them, you’ll just have OTHER ones.

The answer is TNR and management. TNR stands for Trap. Neuter. Release. You set cat traps (and check them EVERY DAY – twice a day if possible). Bring the cat IN THE CAGE directly to a spay/neuter clinic. MANY will work with you cheaply to help with this. I think they charge about $50 and they fix the cat, test them for disease, get them up to date on all shots and ear tip them (so that in the future you will know this one was already fixed).  Here is a great link to show how much cheaper it is to TNR rather than euthanize: http://www.guerrillaeconomics.biz/communitycats/

This is a WAY better use of money for the community that catching, killing and disposing of body after body after body. You can even raise the money for this too. Host coin drops in the street, or go door to door and ask for $10 per household to help with these costs. When you explain to people about this they are usually willing to help. Explain it so it makes SENSE.

An established, managed, community won’t let others in, won’t be screaming and yowling as they go into heat or fight over females in heat, and there will not be kittens born twice a year to every female cat! They also provide EXCELLENT rodent control.

We also have found very cheap ways to provide them a little shelter and warmth for the winter. You can see some ideas at these sites and some additional information about feral cats:

So the end of this blog is just to say a few simple things.

1. Stop believing that the only way to solve an animal “problem” is eradication. You’re just wrong…it doesn’t solve the problem (it makes it worse and MORE costly) and death is never the answer.

2. Show compassion. Compassion for ALL creatures, not just human ones. If some people are more compassionate than you are…leave them alone (i.e.people feeding), try supporting them instead. These compassionate people may be your biggest and best resource. USE these people, don’t condemn them.

3. What goes around comes around. Killing these cats will just give you other problems you then have to deal with. Your problems as a result of killing them all just keep cycling and won’t stop. Managing them SOLVES your problem. When you choose death as a solution, you hurt yourself, your community AND the animal. Choose LIFE.

4. Help. Take responsibility, don’t turn away. YOU are all they have 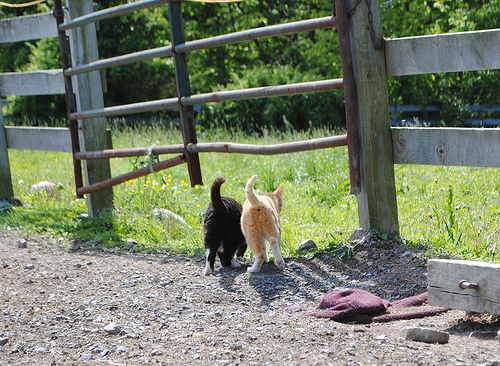