Send In the Clowns – this IS my circus and these ARE my monkeys!

What a day it was today. One of those days where everything that could go wrong – DOES, but in my case it all went wrong in hysterical ways.

So, Tom is working today and I have to get three of the five horses that are here at our house to a scheduled vet visit over in Pine Bush.

No problem!
I can handle this alone.
I’m an independent and efficient woman!
Hear me roar! 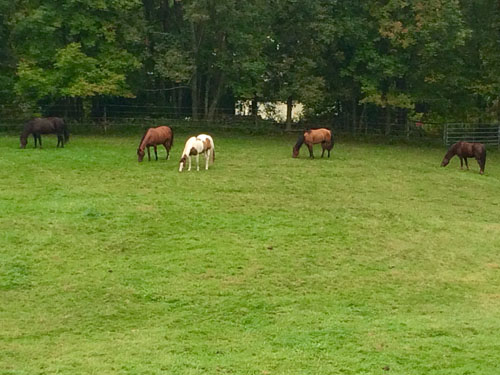 Ok. They are all loose in the field so I grab halters and lead lines and I call to them – and they actually come! – and I halter them. So far so good.

I’m swaggering a little, like a cowgirl (efficient and independent), as I walk to the trailer.

I put Thunder and Rein in.
I have a huge stock trailer so I don’t tie anyone, but I do point at them like they are dogs and I yell “STAY!!! STAY!!!”, because i have to put the third horse in now…and, um, I need them to STAY.
That should work.

And shockingly it DOES. They stand there while I tell Choctaw to go in. He starts in, gets about 3/4 of his 1100 pound body into the trailer when Rein says very strongly “UH-UH. Not YOU bub!” and LUNGES at him with her teeth barred and her ears flat.

Choctaw does a 360 degree turn in mid air (all 1100 pounds of him) and tries to leap out of the trailer …and at the last minute he manages to somehow spin himself so he doesn’t run me over.

I can’t even be mad. He purposely spared my life. Good boy.

He then takes off up the field, with Boss and Storm running alongside, at full speed.

Great.
I start laughing though because I’m feeling a little like the keystone cops.
But I guess I’m maybe just one cop with a bunch of keystone horses.

So I watch them race around like lunatics for a while and I have the brilliance to shut the divider so Rein and Thunder can’t leave (only because I can’t stand there with my finger pointed at them to STAY now).

And while I’m watching the craziness, the three loose, racing, crazy horses head right at me. They dart around at the last minute and Storm jumps into the trailer and stands there politely waiting.

Now I’m laughing so hard I can barely breathe.
I don’t have a lead line or a halter and he refuses to get off he trailer.

So I do what any good horsewoman would do and I head to the tackroom to shake some grain.

The other two horses are still racing around the field at about 100 mph and in a frenzy.

Shaking the grain is successful..as always… and results in them running into the paddock – even Storm self-unloads for some grain.
Good.

I clip Choctaw and start to walk him back out to the trailer, but Boss races out in front of us.
Before we can reach the trailer, Boss beats us to it, and self-loads, and is patiently standing there waiting to go.

I’m laughing so hard I can’t breathe.
It’s insane.
You can’t make this stuff up.
And people have trouble getting their horses to trailer. Sheesh.

Ok. I tie Choctaw to the trailer and I get a lead line and unload Boss.
Then I put Choctaw in.
Storm loads himself in with Choctaw.
Choctaw unloads himself.

I’m now on the ground rolling in laughter.

I manage to get myself up, get them straightened out, get the right horses into the trailer and herd the other two into the paddock because I can see where this is going if I try to open a gate to drive the trailer out.

We get to the vet and Thunder needs an x-ray. While waiting for the machine and paperwork and other things to be done, I go on, and on, and on, – oh and on –  telling them all what a great horse Thunder is and how well behaved, and how he is the perfect horse.

On and on.
Because it’s true.
And vets love to hear that.
They absolutely love endless blabbering about your perfect pet.
They love it.

So. I’m doing that for them.

I’m not really done going on about how great he is, when suddenly Thunder VERY casually and without an iota of stress or hostility lifts his head and neck until he puts tension on the cross ties and he LEANS back (doesn’t even STEP back!) and oh-so-calmly snaps first one cross tie, and then he turns his head the other way and casually RIPS the other cross tie right out of the wall ten feet up.

I look over at Thunder and he has dropped his head, closed his eyes and he’s snoozing. Seriously. He is practically snoring.

Omg. The room is dead silent and then Dr. Herb says softly “Uh, is everyone alright?”

Well that does it. I go into fits of laughter in between apologizing profusely and offering to clean up all the plaster, pay for the damage, and so on. I laughed so hard (in between apologizing so profusely) that I think they must be quite sure something was wrong with me. But after the morning I had, this just made me completely lose it. 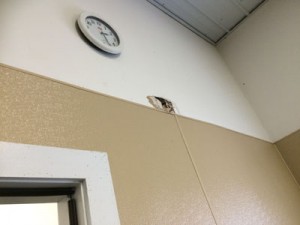 Ok. I get myself under control and we are able to go on.

All of a sudden I hear Dr. Herb exclaim “Holy crap look at that dog!”.

I don’t need to look.
Know why?

Because I brought Ernie with me and I don’t have to look.
I know that whatever is going on, it’s Ernie.

Sure enough I look out the window and there he is in my truck popping up through the sun roof and trying to climb out onto the roof of the car. Popping up, and falling back into the car. There goes his head again, popping out of the sun roof, and then he falls back into the car. Like that wind up pop-goes-the-weasel toy.

Sigh. Out to the car to shut the sun roof. 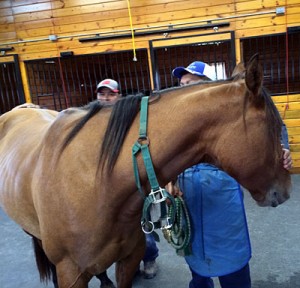 Rein’s turn. They bring three different vets into the room to look at her and no one has ANY idea what could be causing this issue she has and they freely admit that to me … which just makes me laugh again because of course it’s me that brings an animal case to the vet that three seasoned and experienced vets can not diagnose and indeed are scratching their heads over. Only me.

Ok.
All done and heading home.
Window cracked so Ernie can hang his head out – a LITTLE.

As I pull up to a stop sign I hear a sound.
It’s familiar but I can’t place it.
Then I realize it’s the sound of the power window going down.
Like a dope I look at MY driver side window.
Why would I do that?

Within a split second I realize what’s happened and I look to the passenger-Ernie-side window and yes, sure enough, Ernie has put his own window down, stepped onto the side view mirror, and then on to the hood of the car and is now a live hood ornament at the center of the hood of the truck, looking straight ahead waiting for me to go.

I jam the truck into park, leap out and grab Ernie and as I open the passenger door to put him in I see I left the driver door open and Jasper jumped out and is walking all around in the middle of the road. I slam the passenger door, race around to the drivers side, pick up Jasper just as Ernie leaps out of the open drivers door to chase a squirrel across the street and up into a tree.

There isn’t enough alcohol for my day today.
The biggest problem is that these ARE my monkey’s and this IS my circus!