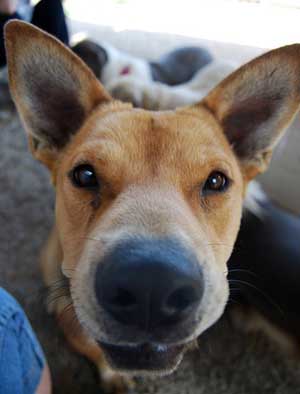 In honor of Scrump Day today, I thought I would tell the Scrump story for those of you that don’t know it…and it seems most don’t!  So here it is – this is a picture of Scrumpy when he was about 7 months old.

Where I used to work we pulled animals in from high kill shelters.  Some were killing up to 95% of all the animals that walked through their doors, so whenever we could, we would take as many as possible.  Scrumpy was NOT one of the dogs chosen …but he arrived on a transport with 20 other dogs we had pulled. A dog that we HAD requested was NOT on that transport. I contacted the sending shelter only to find out that a mistake had been made. They had euthanized the dog we had requested and Scrumpy (who had been scheduled for euthanasia) was sent by accident. She was very apologetic and told me they would arrange for him to come back to them.  Um….for what?  To kill him?  Ridiculous, so Scrumpy stayed.

Immediately, we knew Scrumpy was “special”.  He had many medical issues, was bow legged, was pitched forward because of the severe bowing in the front and was very “high” in the back.  This made going up stairs difficult for him as well as many other normal activities.

Scrumpy had many medical conditions.  A very serious heart murmur and his bloodwork showed he was in both liver and kidney failure. We figured he would not be around for long and decided to just make him as comfortable as possible for the time he had. Problem was that Scrumpy was EXTREMELY fearful and timid and that resulted in displays of aggression to anyone that came near him. It turned out to be fake – while he was barking and growling at you, if you went CLOSER he actually fell over himself trying to get away from you, but at the time we didn’t know that and so we treated him with a lot of healthy respect.

I called Pat Whitacre who was working at Best Friends at the time and asked for some advice dealing with this very difficult dog. He advised to immediately get him out of the loud and fearful kennel and make him an office dog. So into a staff office he went and that staffer had to use a huge kuranda bed to block him every time they tried to move around in their office because any movement would result in him jumping up and aggressing toward them.

Eventually we realized that he wasn’t all that aggressive, he was just terrified … and so when we started treating his fears he quickly came around and developed a very loving personality.

After a month or so, he didn’t die (ha!) so we brought him in to be neutered in the hopes we could adopt him out for the months or year he had left. And so he was fixed – but then he wouldn’t move.

Literally.  Would. Not. Move.

He lay on the floor of his kennel, even when food or water was right in front of him. For days he lay there after neutering and would eat voraciously if we hand fed him but would not move to eat food in his run, or drink water and he urinated and defecated where he lay. It was very stressful for us all. Was he paralyzed? No. Because we would see him move his limbs just fine but other than that he just lay there.

So we brought him back to the vet who could find nothing physically wrong and so then we brought him to a neurologist who also found nothing wrong and indeed at the neurologists and at the vet Scrumpy walked around fine.  But put him in his kennel…he lay there unmoving. So we moved him to an office. Still.  Wouldn’t move. So then I called Pat Whitacre again and said “What the hell Pat? Fix this shit!” (remember, Pat was 2500 miles away!) and Pat said….”OHHHHH!” when I explained all the details. He said “You got him neutered, and he is wearing a cone?” I said yes. He said “Take the cone off, he will be fine.”

SO I am perplexed but I head to the kennel, take his cone off and Scrumpy LEAPS up and rushes to his food bowl.

Pat later explained that some dogs are so confused by the cone and not being able to see the rest of their body that they don’t think that can move. He kindly explained that Scrumpy was probably not one of the brighter dogs we would ever have, and later as the months went on this became very apparent. One of our vets likened his intelligence level similar to what we would call mentally retarded or handicapped and that is true to this day in that you can open a door 450,000 times from one side and Scrumpy will still stand on the other side waiting for the door to open.  When he was at the vets, we were removing the cone for easier examination.  So that’s why he acted fine there! LMAO! He is definitely “special”. It also took us about 45 days after we adopted him for him to stop barking at us and recognize who we were each morning. But similar to the mentally handicapped he is WEIRDLY STRONG and extremely loving and affectionate.

So Scrumpy became available for adoption and as such went to live in a large outdoor run with another dog, but other dogs – no matter who we matched him with – eventually got annoyed with him and would attack him. Because of his mental “issues”, he has no concept of dog manners or dog signals. A dog could be growling at him and baring his teeth and Scrump will just wag his tail and continue trying to go up and sniff that dog. Scrumpy also is food driven and would try to eat all their food which never went over well. He also is freakishly strong and he would mow them over (CONTINUOUSLY) trying to be “friendly”.

After a few months his blood levels didn’t change or they changed RADICALLY from one thing to another, and we had treated everything … and then we didn’t because none of it made much sense and finally one of the vets threw their hands up and told us that maybe these oddities were normal for HIM. A cardiologist said his heart was so oddly shaped and he had so many weird things running through it that if an engineer looked at it, they would say this heart couldn’t work. But …his heart DOES work. He breathes hard during any activity, but his heart does pump (obviously)!  So eventually we stopped treating him for all these “ailments” and Scrumpy lived on.

I did forget to mention that at the time, the staff named him Tommy – as a joke really because I was so smitten with this weird dog and would stop to visit him every day. Eventually “Tommy” was adopted and I was really happy for him. I was sad to see him go but happy he had a home with another dog. But he came back two days later because their sweet and gentle and patient dog kept attacking him because Scrumpy wouldn’t leave the dog alone.

And then about a month later he was adopted again – no other dogs in the family – and the couple that took him seemed like they would really love him. Imagine my surprise when I ran into our adoption coordinator later the next day at a fair and mentioned how happy I was that “Tommy” had gotten a home, and she told me “Oh, you didn’t hear?  He came back last night.  People had some family emergency and decided they couldn’t have a dog right now.”

I looked at my husband, completely dejected and bleak…we already had FOUR dogs. And he looked at me and said “OK.  Let;s go get him.”
And we did.   We left the fair, drove to pick him up, put him in our car and took him home and he’s been with us the last eight years.  Still with a ton of medical issues but still kicking and fighting and living life.

Tommy the husband Tommy refused to change HIS name, so we were forced to change Tommy-Dog’s name and because he has this way of walking RIGHT into you and tripping you – CONSTANTLTY – we had started saying we were being “SCRUMPED”.  As in “Why is your head and shin bleeding?” Answer?  “I was just scrumped”.  So Scrumpy became his name.

Best veterinarian guesses were that he would live maybe 2-3 years but so far he is still going strong. Of course every time he sneezes or coughs I’m rushing him to the vet thinking “this is the end!!” but so far he continues to surprise us and live on and enjoy life and our dogs don’t beat him up anymore and they kind of sigh heavily when he comes near them and they try not to get scrumped but we do often see them getting knocked over or sent flying as Scrumpy plows into them trying to be “friends” or knocks them down the stairs, his favorite place to slam into you.

Scrumpys best friend was Sera..a dog we lost a few years ago to bone cancer. She, of course, really hated him, but he thought she was the best thing since canned cat food. He LOVED her. Would always try to lay with her and snuggle with her…followed her everywhere. She really barely tolerated him but luckily Scrump never noticed. When she died, we buried her in the yard and all the dog attended her “goodbye” and after that, for five days Scrumpy would go out every morning and lay in front of her grave all day.

Now his current BFF is Kipling, who also equally despises him…but Scrumpy never notices any of that.

So that’s the Scrump story. 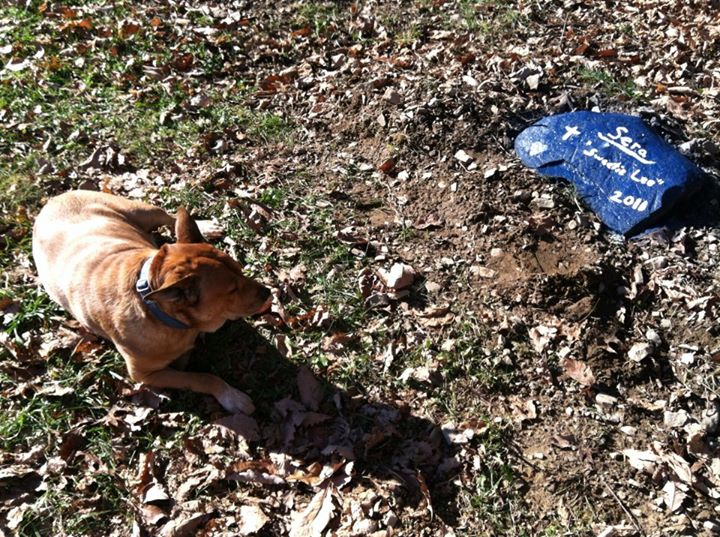