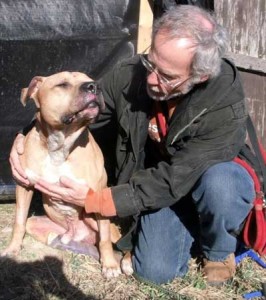 Today at PIUTW, we lost our canine behaviorist.

Today I lost one of my closest friends.

Today the dogs of the world lost an amazing advocate.

I’ve started and stopped this blog a dozen times because I don’t think there is any way that I can get the words to come out right.

There wasn’t a dog here that wouldn’t see Pat coming and start wagging their tails. 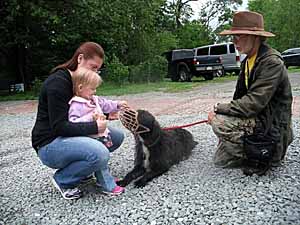 Dogs that most people would have given up on, he couldn’t wait to start working with. He would be delighted to find out there was a new project dog coming in, and would immediately start devising a plan for them.

Pat had off Sunday’s and Monday’s but because he lived at PIUTW he was never “off” and would most days come down and help volunteers, or walk the more difficult dogs or spend some extra time with a new dog or a shy dog.

I can’t even explain to you how much he meant to me. 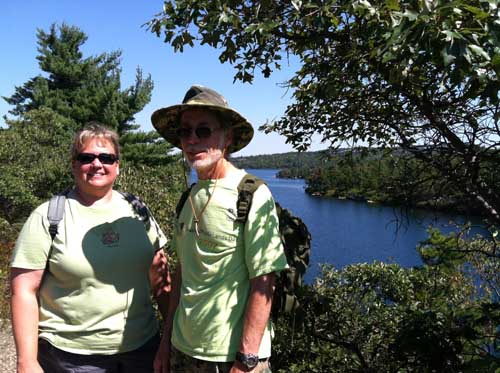 He would come horse back riding with myself and my husband, or hiking with me and Karen, or kayaking with me for 5 hours at a pop. He was just a GREAT friend. 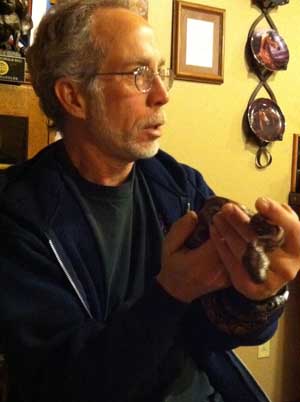 Pat was NEVER judgmental. You could tell him anything at all and he wouldn’t judge you, or anyone else.

He never spread gossip. He never had a cross or rude word to say about anyone. In all the years I knew him I don’t think I ever once heard him say a negative thing about another person.

Pat was also the guy that you could sit in the middle of any group of people – rednecks, snobs, hillbillies, democrats, republicans, liberals – it didn’t matter….Pat could talk to anyone and carry a conversation and he always had something interesting to say or add to any conversation.

Also in all the time that I knew him, I never once ever ever heard any person have a complaint, derogatory remark or criticism of Pat. EVER. I don’t know anyone else in my life that I can say that about. Everywhere you go, someone doesn’t like SOMEBODY else. But not Pat. EVERYONE liked Pat. Everyone. He was just that kind of guy. 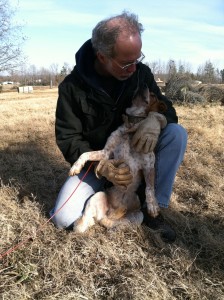 He was humble. He was self deprecating. He was funny. He was game to try anything. He was so much fun to be around.

He and I rode our motorcyles together, we hiked, we kayaked, we went out drinking…. and no matter what any of us suggested, Pat would give it a try. We even dragged him to Zumba classes! He went, and laughed and said at the end that maybe it wasn’t for him.

I learned a great deal from Pat. I learned that often there is more than one solution to a problem. That may sound oddly simple but I think I used to get caught up in “THE” answer. Pat taught me that there were a lot of answers and one may not really be better than another.

Pat taught me to look at problems and be able to see solutions that might not be the ordinary fit. He taught me to think differently.

“Technically” I was Pat’s boss, but whenever I had a serious issue or a problem, he was always the person I would go to and discuss it or twirl it around in his head and see what came out. He made me see failure as a growing experience and not something to be upset about. 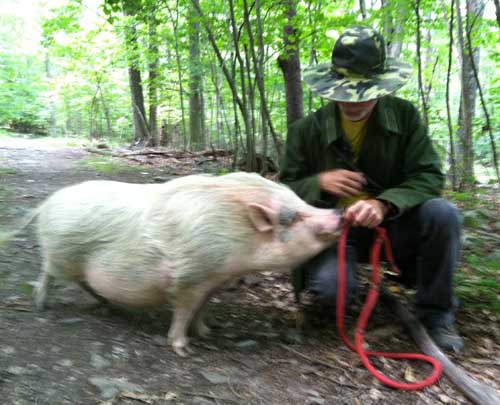 Some days when the stress of my day got to me I’d seek him out and I would pretty much accost him, usually as he was walking a vicious dog. I would start talking a mile a minute and start petting the dog and patting my chest for the dog to jump up on me ,while he smiled at me and advised softly that he had just been teaching the dog that jumping was not something you do when greeting visitors. Oops.

And he would laugh a little and say he was done anyway and why didn’t we go get some coffee? 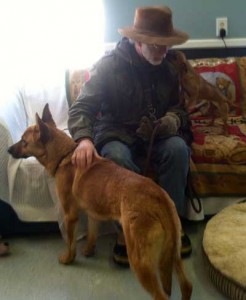 He was a great person to talk to you when you were upset or stressed because he had such a calming and soft way about him. I so enjoyed his company and so loved doing things with him, or having conversations about tons of different subjects. Pat was super smart and had a lot of knowledge about so many things.

For almost a year we hunted for houses with him. His requirements were small. A tiny living space, a tiny place to wash up, and a HUGE garage! That was what he was looking for…and any of us that saw such a dilapidated shack with a HUGE garage would immediately call him and then run back out there with him to check it out. Nine times out of ten the garage was too small. (I tried to explain to him that people living in dilapidated shacks didn’t build big four car garages, but he never really got that). He never cared about the living space…but he had DEFINITE opinions about the garage. 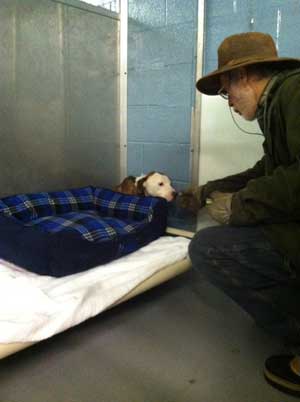 Before Pat came we had about a 10% rate of returns for dogs. After Pat came we had about a 2% rate of return. And the 2% that came back, he would usually “fix” about 1.9% of THOSE and they’d be back out and adopted in a short time. Pat was a wizard with dogs. I’ve been around dogs my whole life, I absolutely love dogs and I know dogs really well – but everything I knew would fit into a thimble compared to how much Pat knew about dogs. And it wasn’t from classes and training and seminars. Yes Pat took all those classes and got all his degrees, but Pat was really self taught. I spent endless hours talking to him about dogs and training and the “why’s” and the “why-nots”. He said most of his training was done by watching a dog and figuring out what the dog wanted.

Pat was instrumental in getting Robert back on his feet and standing and then walking and finally running again. He was one of the few that was able to befriend Kyla.

He helped the the aggressive, the lost, the scared – any dog that was abused or mistreated could find a friend again and learn to trust again because of Pat. 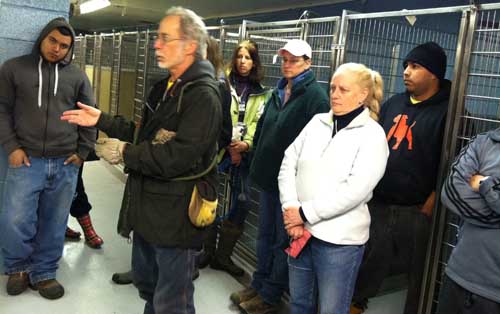 I remember when he flew out here to help us work with a really shy dog named Amelia. A dog we had tried to help and failed. 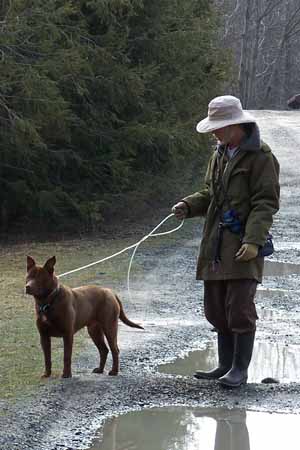 I remember when he first walked Cam….the most vicious dog we had ever seen. It took Pat about three days to have Cam out and on a leash and now Cam is a staff and volunteer favorite and handled and loved by many people.

I remember when we were about to do the Arkansas rescue. We had no idea what we were getting into. I called Pat and at the time he was still working for Best Friends and I asked him if he could come and help us. He did. He took some vacation time, flew to Arkansas on his own dollar, and helped us for three days out there while we figured out what we had, what we were looking at, and the reality of the situation. When I started to lose it with the crazy guy running this “rescue”, Pat was the voice of reason that intervened and got the contract for surrender signed. 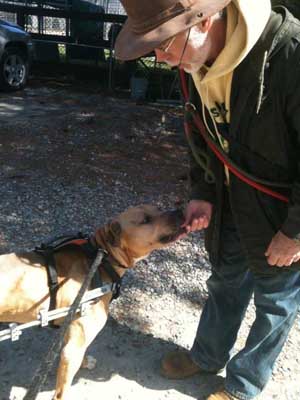 A group of us from PIUTW go out to eat about once a week and Pat would always join us. This week he wasn’t feeling well and turned us down for the first time. He had a cough for the past few weeks and also cancelled training class this past Saturday which was very odd for him. We all figured he was coming down with the flu. But the reality was that he was very sick…and while results are not back yet, it appears he had a heart attack. One of the healthiest and fittest men I knew. It is almost unfathomable.

I know this blog is jumbled and disoriented, but that is how I feel and I can’t seem to get the usual flow of words tonight. I invite you all to write in the comments your own memories of Pat and how he changed you, or your dog.

I keep hoping and praying that I will go to sleep tonight and when I wake up in the morning this will all have been a bad dream and Pat will be out walking his dogs, Timber and Kipling, and I will start talking too fast and he will say that maybe it is time we go to my office and have some coffee. I have a feeling though that won’t happen. That Pat is truly and really gone from this world.

And my heart weeps on that reality. 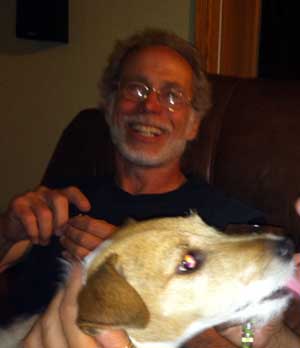 Today I lost a great friend.

You will always be a part of me, a part of PIUTW, a part of Best Friends, and a part of every person you touched.

Most of all there will be many paws that will miss you and your calming and loving impact on their life.

For them…I truly cry. Because to them, they have lost so much more than the rest of us.

The dogs lost the one person in this world that completely, and truly, understood them and was their voice.

I love you Pat.

I will miss you forever.

Rest in peace my wonderful friend. 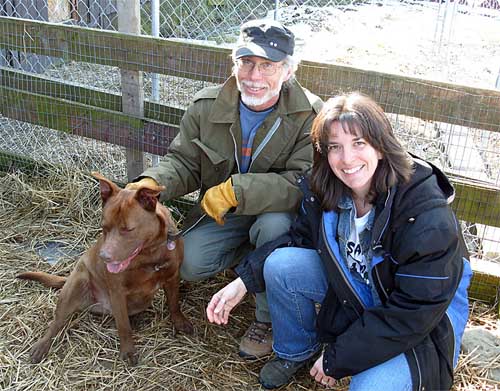